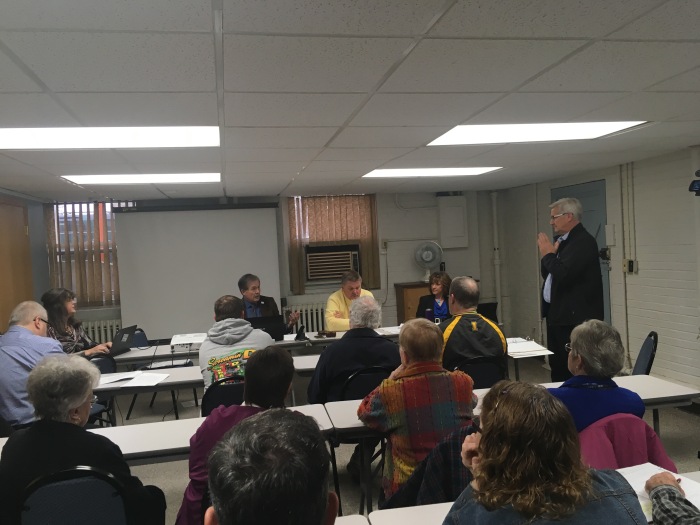 CHARLES CITY  — A resolution to set some worker safety standards for confined animal feeding operations in Floyd County failed to pass at Tuesday’s Board of Supervisors meeting.

Supervisor Mark Kuhn offered the revised resolution on Tuesday after it was apparent at a previous supervisors meeting he did not have the support of either Supervisor Linda Tjaden or Chairman Doug Kamm.

Despite his efforts to revise and the comments from an audience of less than a dozen people, Kuhn failed to get a second to his motion to pass the resolution to require CAFO operators to meet certain worker safety standards in order to get points on the topic toward site approval from the state. The points are scored in an evaluation tool called the Master Matrix.

Kamm, as he did the previous meeting, said Kuhn’s efforts are misleading people to think they are doing anything to change the Master Matrix, which he agrees state lawmakers and the governor need to revisit.
Tjaden said she supports what Kuhn is attempting to do, but the Master Matrix is the wrong vehicle to effectively make a difference in safety issues. It reaches only a limited audience. She would prefer to see an education effort that hits the masses not just the Master Matrix, she said.

“In this particular situation, I agree with what Mark is trying to accomplish, and I want to reiterate that,” Tjaden said. “But I would rather see him try to get to the masses rather than tie it to the Master Matrix because this is very few people that this is even going to hit.”

Tjaden encouraged working with schools to educate about the issues such as dangerous gasses produced by manure.

Kuhn embarked on a strategy months ago to use the Master Matrix, flawed as the County Board says on record that it is, to set local standards within topic questions CAFO operators may answer to get points that contribute to the state approving their choice of location. Once the Master Matrix is complete and accepted by the Iowa Department of Resources, the agency is bound to enforce those standards set forth by counties, he said. However, The Matrix doesn’t require operators to answer all of its question, just enough to get the required 440 out of 880 points.

The insertion of local standards in the Matrix, although allowed, has rarely been done. Floyd County has done it twice now. The supervisors agreed to require posts to be placed around certain wellheads on CAFO properties. They also have required operators and specific representatives to attend a county hearing to gain a recommendation to the DNR for site approval from the County Board. If not granted, the process to get approved becomes longer for the operator, but it is not stopped.

“We talk about how few people this would impact, Kuhn said in closing “We are having and have had for two weeks long discussions about this resolution. This is being talked about not only in our local media, this is being carried in the statewide media … Since this has been introduced, I’ve had three supervisors from three counties request a copy of this, (who) were interested in this. So let’s not ever think this is just about number 37 on the Master Matrix we’re talking about. This is a much larger issue.

“And finally, we have come so far today, both the resolutions we have already passed are working.  We have seen the results … here. Let’s not turn back now when we are on the verge of creating another important resolution. There is a time to be silent and there is a time to speak up

“Mr. Chairman, on behalf of workers in CAFOS and the next generation of livestock producers in Floyd County I move resolution 20-17.”

“Motion dies for the lack of a second,” Kamm said.
THE RESOLUTION

Resolution 20-17 reads that “in order for points to be awarded in question #37 of the Master Matrix, the applicant’s worker and safety protection plan shall include at least three of the following five best management practices:

“1. Verification shall be included with the application that any worker employed at the proposed CAFO is provided with workman’s compensation insurance if the applicant (employer) meets the thresholds for insurance coverage in accordance with Iowa Code section 85.1. Contract manure applicators are exempt from option 1.
“2. Signage shall be posted at the entry to all confinement buildings and/or any manure storage structures that warn of the dangers of hydrogen sulfide and other toxic gases. During agitation and pumping of manure, a second warning sign shall be posted near the pump-out area that warns of the imminent danger of hydrogen sulfide and other toxic gases.

“3. Manure pit openings and access areas shall be cordoned off with gates, railings, cables, or other means to prevent accidental falls into the manure pit and pit access area.

“4. The applicant (employer) shall provide employees, other than contract manure applicators, with hydrogen sulfide gas monitors to be worn by employees during agitation and pumping of manure. Training assistance to use the gas monitors properly will be provided locally by the Great Plains Center for Agricultural Health at the University of Iowa, College of Public Health.

“5. The applicant (employer) shall verify that employees at the CAFO, other than contract manure hollers have viewed a two-hour educational training video at the Floyd County Extension office or the Floyd County Youth Enrichment center. The video produced by the Iowa Manure Management Group at Iowa State University and supported by the IDNR warns workers of toxic air emissions and encourages best management practices.