CHARLES CITY — The day had gotten unseasonably hot, but May 15, 1968, was otherwise just another northern Iowa Wednesday.

Life for the roughly 10,000 residents of Charles City bustled along. The Charles City Press was out on the news stands with page one stories about the Vietnam War, a wounded hometown Marine’s letter to his parents and the City Council working on a city “renewal” plan. The school day was done and children were at the Charles City YMCA for swimming lessons. Others were on a church group outing at Wildwood.

Charles City High School Spanish teacher Al Bode and his young son, Sean, left their apartment to go to Dairy Queen to pick up his wife, Patricia, from work. Shoe repairman August Merton, was working in his shop, a converted garage on Gilbert Street. Melodee White was at her job at Melody Lounge. Her sons Dean, 5, and Kurt, 3, were waiting for her at their grandmother, Florene Leach’s, North Grand Avenue house.

Storm warnings came over the car radio as Elaine Mead, a Charles City senior and her pal were driving around town on errands. They simply ignored them. They were seniors. Nothing could happen to them. Schoolmate Rosemary Byrne, a junior, however, felt a change coming as she walked to her job at the telephone company switchboard. She stopped at the corner of Jackson and Ferguson where the air around her felt strange. Later, she would call this a pre-tornado feeling.

At 4:10 p.m., about 25 miles southwest of Charles City, the first tornado of the afternoon tore into the Hansell and Aredale area. Two tornadoes were seen simultaneously at the east edge of Aredale.

Farms were the first victims as tornadoes splintered, twisted and tossed farm buildings, yanked out massive trees like weeds, and snapped power lines.

A twister thrashed Lloyd Bailey’s house but left it standing in place. It tore out every other building except one and threw them across the road into Alfred McWilliam’s field. Boards and splinters were thrust into trees.

On the Lawrence McKinney farm about a quarter mile east of Aredale, tornado winds twisted most of the buildings every which way. Pieces of Roger Landers’ farm, which was about five miles northeast Aredale, were flung a half mile away.

The storm skipped over Marble Rock and then resumed grinding on to Charles City.

At the phone company switchboard, tornado reports flooded in from multiple areas, with disbelief and shock in their voices.

“There’s a tornado in my back yard!” one of the many callers exclaimed.

“Go to the basement!” an operator replied.

Operators relayed the information to the sheriff’s office, although it didn’t all make sense. Calls came in from different areas. They couldn’t have known then that there were separate tornadoes that would come together outside of Charles City.

At Wildwood Park, a neighbor told Dixie Fox about the storm warnings. She hustled the children, which included her daughter DeDi, 4, and son Dave, 5, back to First Methodist Church.

Downtown became eerily calm, making Mead and her friend nervous. Main Street had cleared out. So the pair began to drive out of town going down Main Street and taking a left onto Gilbert.

The sky turned dark green as children, including Karla Schmitt and Kendra Ludwig, watched while standing at the Y’s front door. Hail drove them inside where they were told to sit cross-legged with their hands over their heads. Soon the lights went out.

When Mead and her friend spotted a massive, dark debris cloud as they neared Dairy Queen on the south side of town, they abandoned their car and laid down on the lowest ground they could find.

“I might be dying today,” Mead thought as she hugged the ground while windows blew out of nearby buildings and trees were uprooted around her.

It was about 4:50 p.m when the tornado began cutting through town. At the telephone company, operators jumped under the switchboard, covered their faces. The roof disappeared and screams joined the melee. Byrne was huddled beside a woman who was not protecting herself and watching the destruction. Byrne hit her and yelled, “Cover your face!”

At the First Methodist Church, Fox and her group were back in the building when they heard an explosion outside. Fox directed the children toward the basement. They didn’t get there. Instead they huddled in the corner of an entryway, opposite of a large window. Fox positioned herself to shield the children. As glass and debris hit her back, she thought she was a goner.

Bode and his son were in their car at the corner of Riverside and Wisconsin when it was lifted into the air. Al Bode grabbed Sean and dove into the back seat. Shards of the blown out windshield slammed into the father’s head. Before he blacked out, he could see paper blowing out where window’s should have been at the IGA Grocery Store that was being remodeled. The store’s roof had been blown off.

Florene Leach and her grandsons, Dean, 5, and Kurt, 3, were on their way to the basement of the Leach home on North Grand Avenue when the tornado hit. At the Melody Lounge, their mother froze at the sight of the tornado, but was pulled into the basement in time

Electric clocks throughout town stopped dead at 4:51 p.m. when the power lines went down.

Al Loynachan was at Grey’s Barber Shop and headed for the Elks just up the street. The weather drove him to run back to the barber shop and slide down the basement stairs on the east side just as the wind blew the door shut behind him.

At the Elks, Eb Willson and Maurice Schrup put their trust in a pool table. Beneath it, they weathered the storm.

In the Y, the lobby was very dark. Children cried when the roar of the tornado arrived. They also heard the breaking of glass all around them. But, it was over as fast as it had started. Outside it became quiet and colder. The smell of rain and dirt was strong. A big tree crashed through the front door and parts of the building were missing.

Herb Budwig, Kendra’s dad, arrived at the Y and collected her and Karla Schmitt. Holding hands, they walked to where he was parked, Immaculate Conception Church. That is as far as he could travel by car. They would count to three as they jumped over live power lines.

Along the way, the girls saw a house tipped over so its roof was in the basement.

Arriving at the church, they saw it was destroyed. Bricks were everywhere. People were walking round in a daze.

Years later, Karla would recount how, “I was shivering so hard that it hurt. It was just all too much for a 6 year old to take in.”

Back at the phone company, a choked-up man’s voice broke through the absolute silence.

Byrne’s eyes were still closed until he called. She and other employees scrambled out from under the debris. There were some injuries, but no deaths.

They did not need to go outside to see the destruction, Byrne would later say, because everything was outside.

On Main Street, power lines were down, cars demolished, store windows broken, many storefronts simply gone, and bricks and rubble filled the streets.

When Al Bode awoke in his car, it was on the ground and he was on top of his son, whose face was full of blood. He got the boy back to their apartment and washed Sean’s face to discover he had a measles-like appearance due to the blowing debris. Much of the blood was actually from Al from glass cuts on his scalp. Neither suffered any broken bones, and wife Patricia was also safe.

Melodee White’s family was stung by death. Her sons survived the destruction of their grandmother’s house. Dean was found by the foundation of where the garage used to be and Kurt was at his grandma’s side next to the house foundation and where an object had fallen on Florene Leach and crushed her.

Mead and her friend survived, leaving the low ground that saved them. They saw a darkened landscape popping with emergency lights, trees stripped bare, and sizzling power lines on the ground.

Stott was a student teacher from the University of Northern Iowa. His body was identified by his twin brother and father. He was found in the Trowbridge area. It is believed he was sitting in his Volkswagen in the parking lot when the tornado hit. The car was blown across the street.

Green is the former operator of an antique shop on Gilbert Street. Her body was found in the housing development wreckage.

The Kniesels were found in the wreckage of Cedar Terrace housing for the elderly. They were living in one unit at the east side near the Brantingham bridge.

Hall, 16, was a victim of circumstance which occurred after the tornado. He was walking on the Kelly Street sidewalk beside the Sherwin-Williams paint store, 300 N. Main, when a portion of the second floor brick siding fell on him. He was alive when removed from the debris and died later.

August Merton, a shoe repairman, was killed when winds blew away his small shop, converted from a garage on Gilbert St.

Art Jacobs, owner of Jacobs Elevator and father of city councilman Harold Jacob died in the wreckage at the elevator.

The roughly half-mile-wide tornado passed directly through town from south to north. It destroyed 372 homes and 58 businesses, majorly damaged 188 homes and 90 businesses and caused minor damage to 356 homes and 46 businesses. Eight churches and three schools were damaged or destroyed. The police station was heavily damaged, and 1,250 vehicles were destroyed. About 60 percent of the city was damaged by the tornado. Damage was estimated up to $30 million, according to the National Weather Service.

A total of 1,565 families were affected by the tornado.

This limited narrative was compiled from news articles in multiple news services after the tornado and personal accounts posted to a Charles City Press blog during the 40th anniversary. Below are some photos published after the tornado. 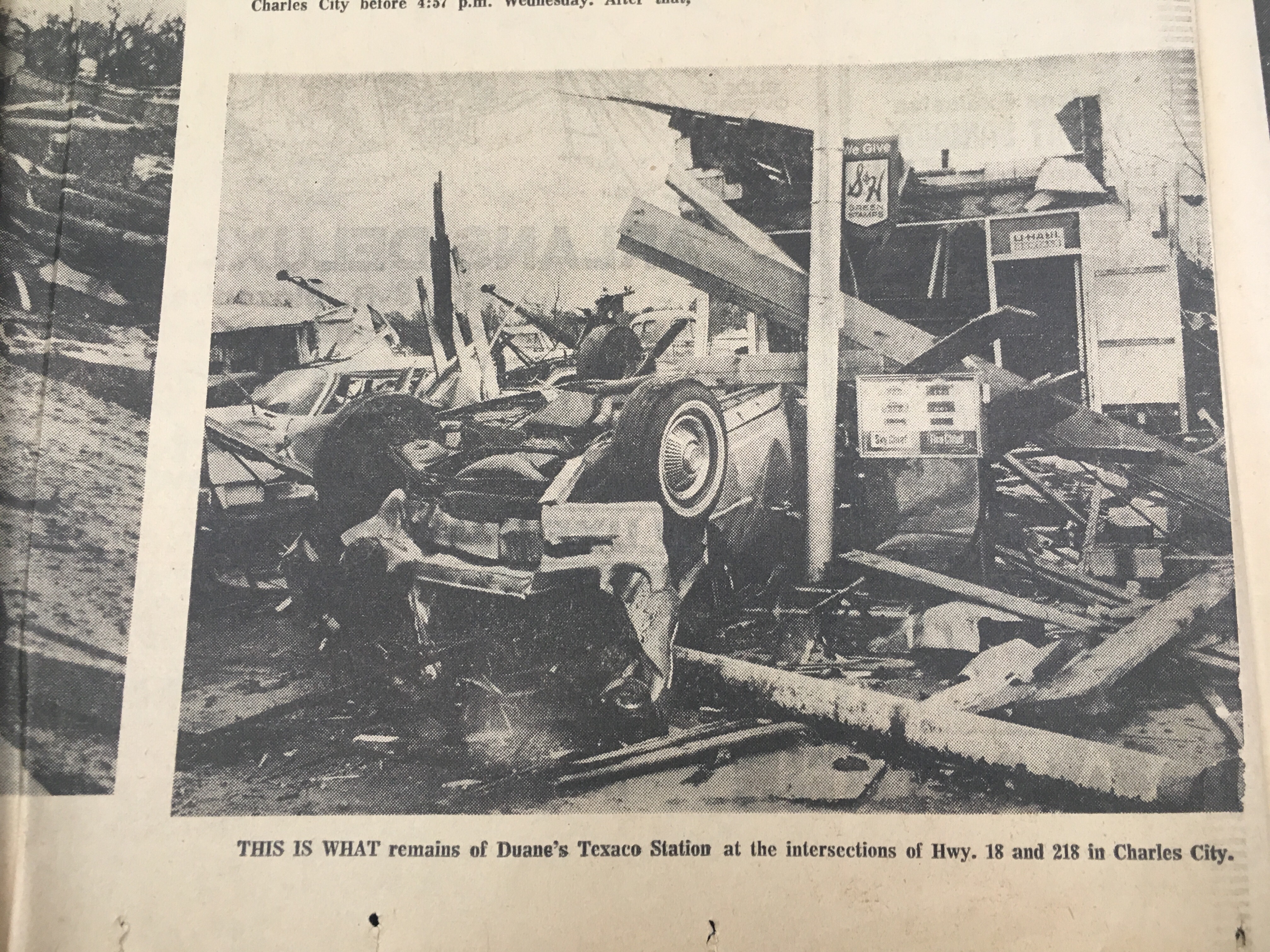 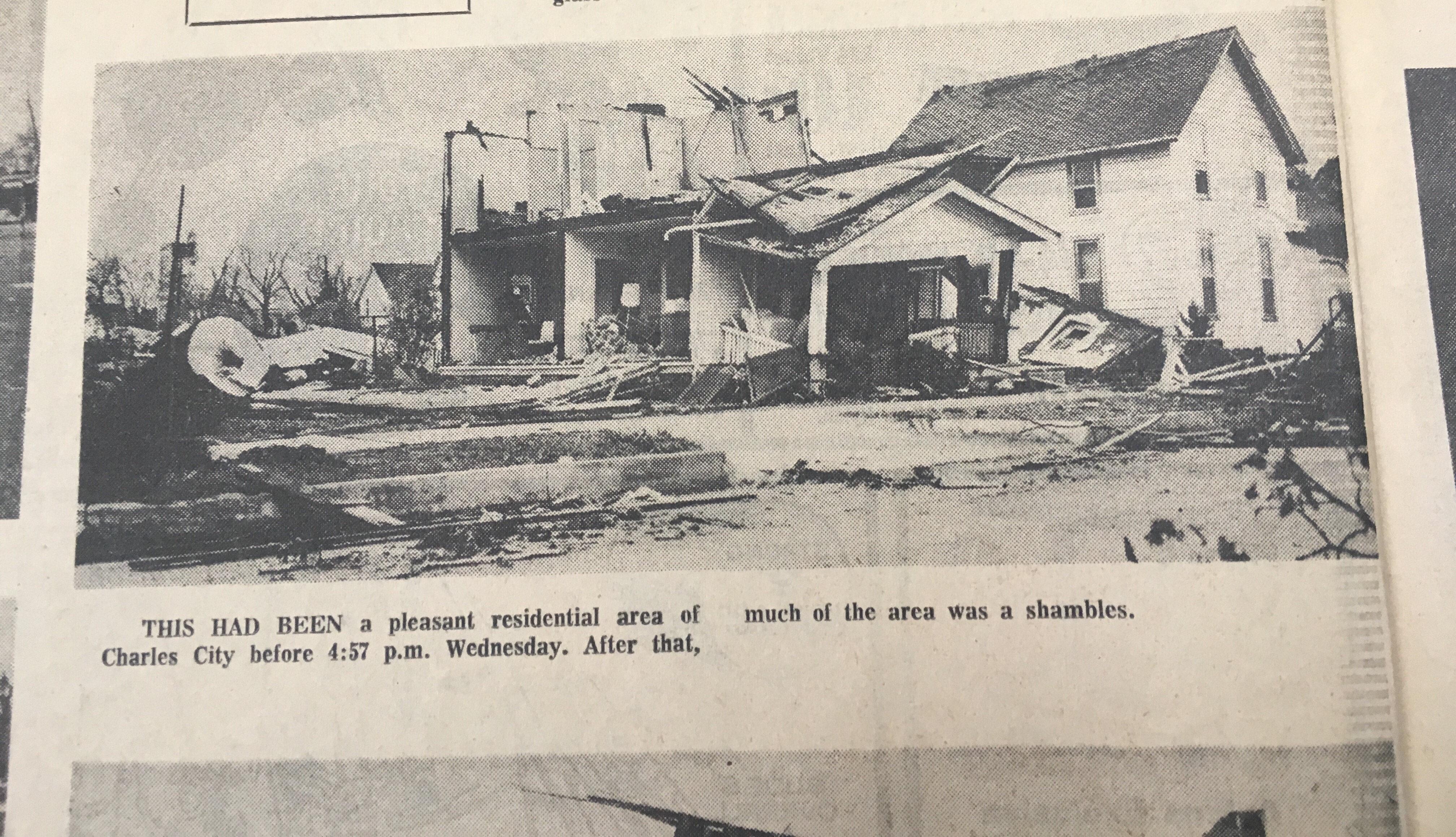 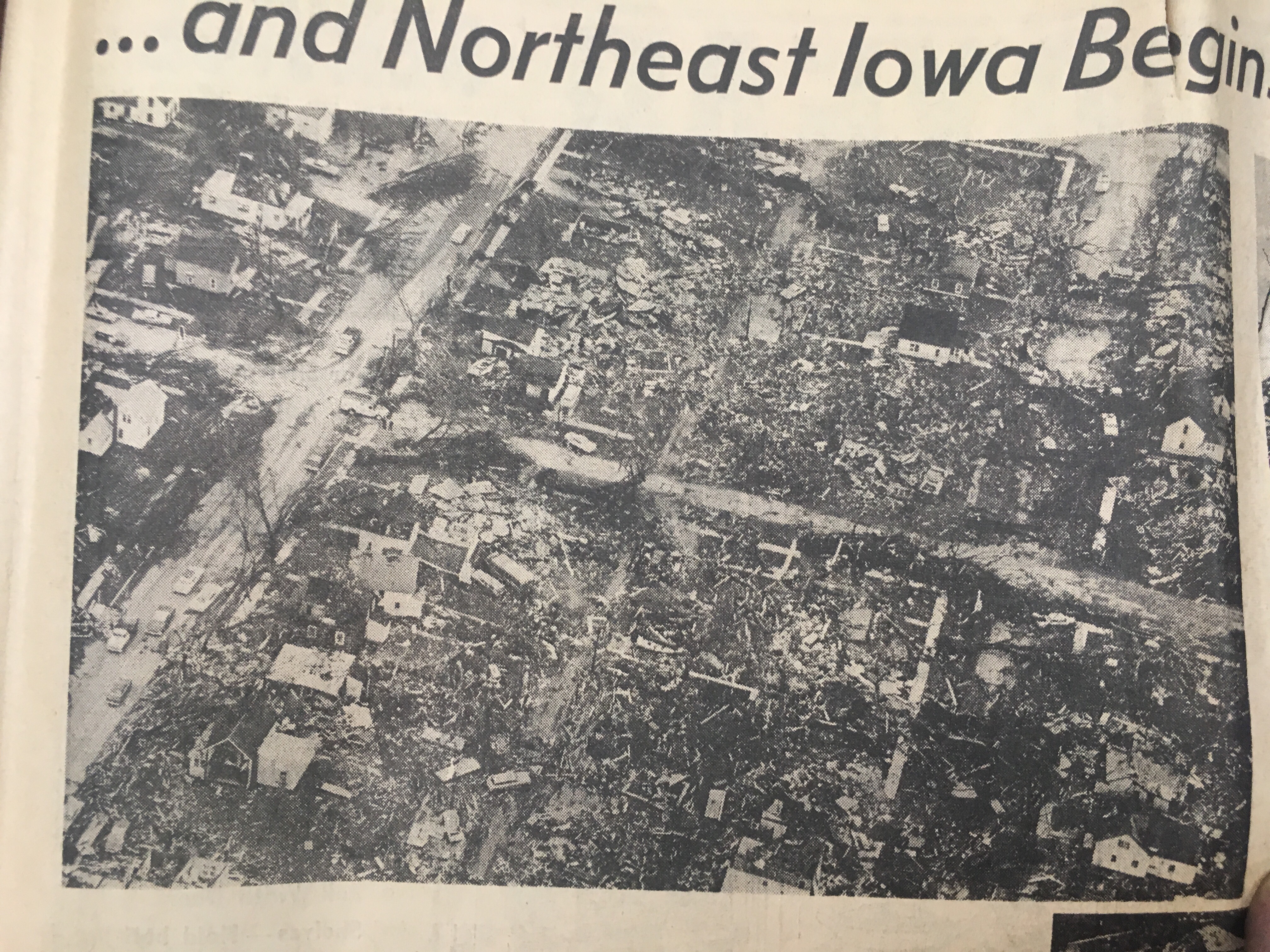 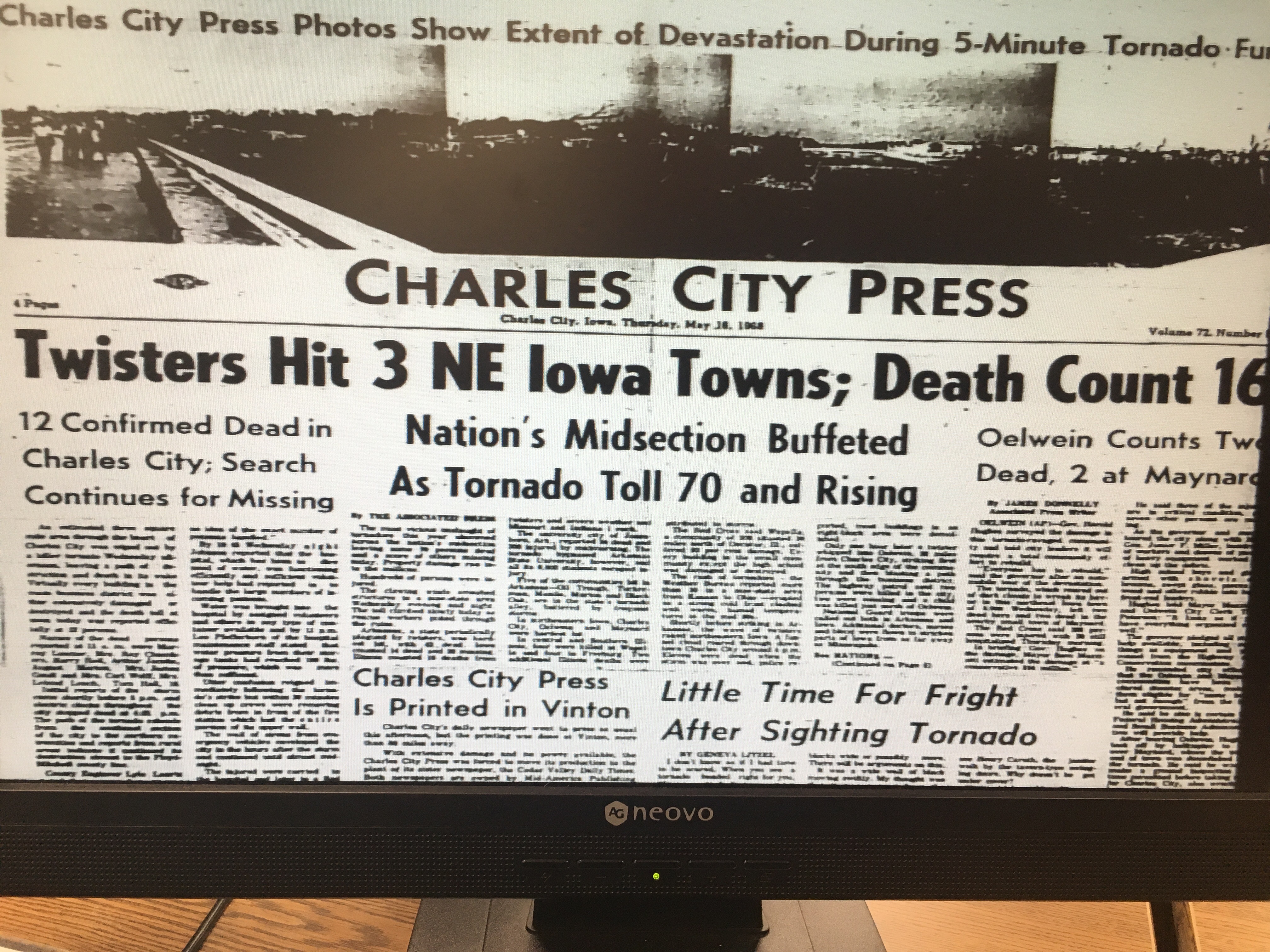 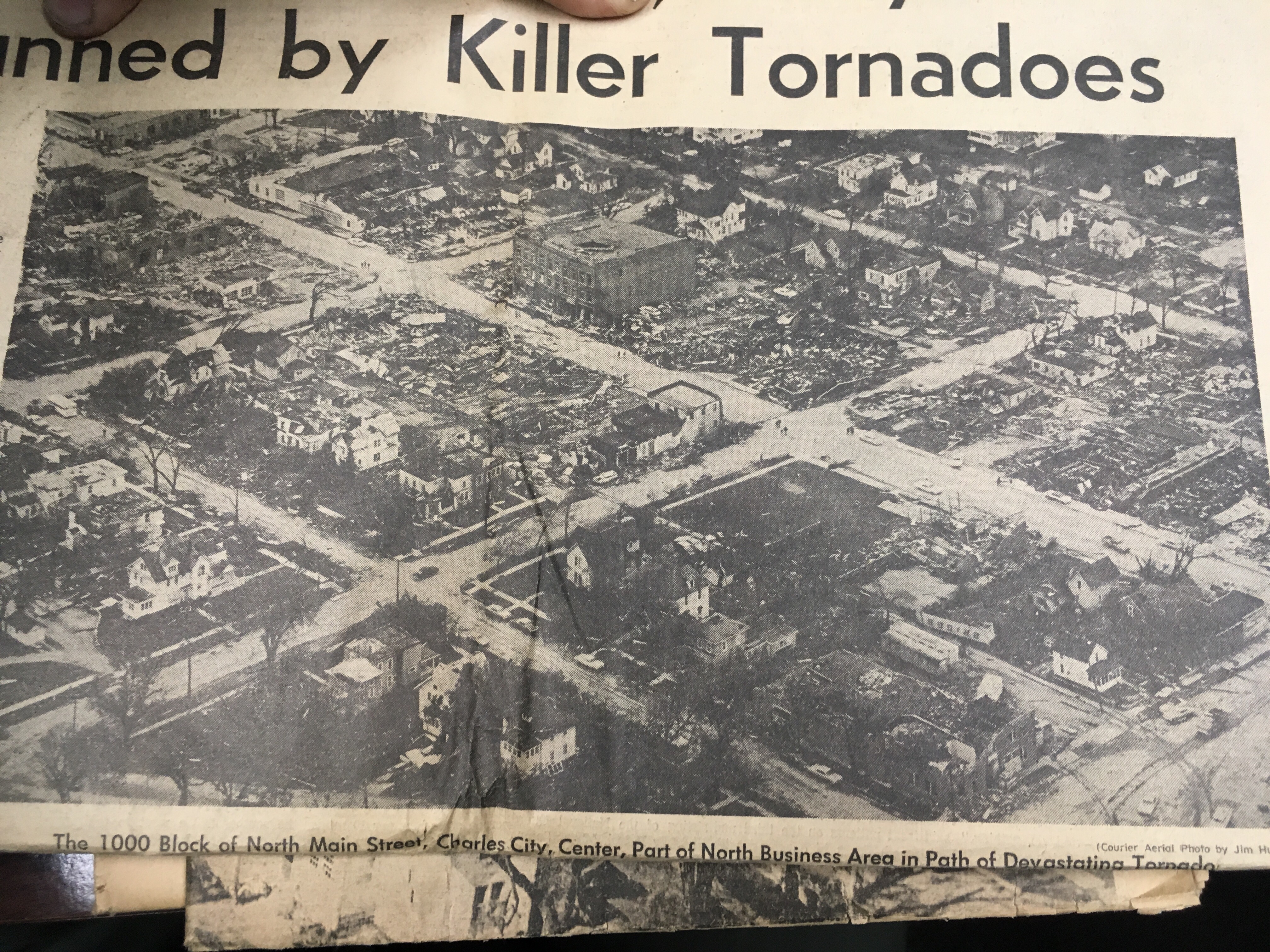 Like Loading...
‹ N. Grand Avenue will be temporarily closed Wednesday-Friday
Party in the Park dates, bands and themes announced ›