CHARLES CITY — This Memorial Day Ceremony at the Floyd County Courthouse was different. At the same time, it wasn’t.
Veteran Art White guided it along, as he has for years, praising the high school band for coming and the FFA for posting the U.S. Flags throughout the city.

The American Legion Auxiliary placed a wreath in the Floyd County Veterans Memorial.

And as taps sounded, an honor guard of local veterans fired off three sets of shots. Only this time, Air Force veteran Ben Cordes was not with them.

Cordes in his dress blues has been an iconic part of Memorial Day, Veterans Day and other services for years.

The 1957 Colwell High School graduate served in the Navy for three years and then the Air Force for 20.

His absence reflects a stark truth of Memorial Day: Each year brings more souls to remember.

Erb in remarks before reading his proclamation talked about the “tremendous special sacrifice being given by our many people both locally and in the service. It is not a chore, a duty that has gone away with time,” he said.

“And in addition we also have our many volunteers here in Charles City who are helping with this ceremony, and we will depend on them more and more, particularly the younger members of our community. We really do need volunteer activity to support all these values we are talking about.” 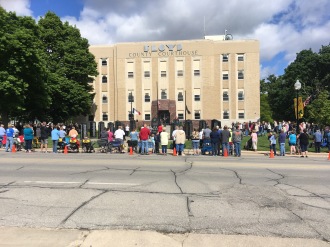 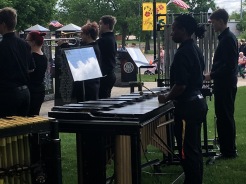 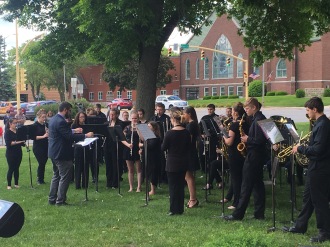 An honor guard of area veterans fired off three sets of shots in memory of those who have passed. – Photo by Chris Baldus