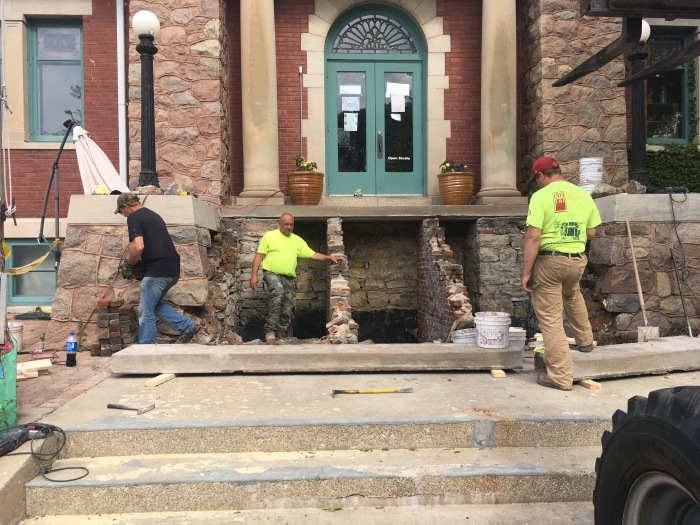 CHARLES CITY — The Indiana limestone steps were stacked out of the way on Jackson Street Tuesday morning as the crew from Renaissance Restoration assessed the job beneath the Charles City Arts Center’s front door.

Bricks were easily plucked out of crumbling mortar in the  walls that held up the steps. The task was beginning to look bigger than first thought.

“Right now we are under contract for about $50,000 in repair work,” City Administrator Steve Diers told Reports. “That amount is likely to increase as some of supporting brick has been found to be in poor condition and will likely need to be replaced also. Not sure at this time what or if those costs will be.”

The original project was to repair to the existing steps at the former Carnegie Library building, which is owned by the city. The footing structure was to be repaired and the steps reset, according to City Council meeting minutes. The center handrail and concrete sidewalk and steps at the base of the stairs were also to be replaced.

Renaissance Restoration intends to have the job finished before RAGBRAI comes to town July 26, Diers said.

The Carnegie Library building in Charles City was built in 1903 according to the State Library of Iowa.  Click here for a link to a list of Carnegie Libraries across Iowa and their current status.