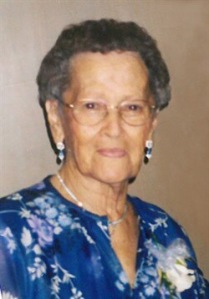 OSAGE, Iowa — Marlys Hodina, 87, of Osage, formerly of Floyd, passed away Thursday, April 6, 2017, in hospice care at the Faith Lutheran Home in Osage.

A funeral service for Marlys Hodina will be held 10:30 a.m. Tuesday, April 11, 2017 at Grace United Methodist Church in Floyd with Pastor Wendy Johannesen officiating. Burial will be at Oakwood Cemetery in Floyd.
Visitation will be at Hauser Funeral Home from 5-7 p.m. Monday, April 10, 2017 and will continue one hour prior to the funeral service Tuesday at the church.
Marlys Maxine Hodina was born September 24, 1929, to Frank and Lula (Wagner) Chesnut. She attended Rudd and Floyd schools, and graduated from Floyd High School. She then graduated from a college for Stenographers at a Des Moines college. She was employed at Oliver in the blue print department as well.
Marlys met Stanley LeRoy Hodina in March of 1956, and after a brief courtship, the two were married on September 8, 1956. They celebrated their 60th wedding anniversary last year. The couple lived and worked on their farm near Floyd, Iowa, for over 33 years. In 1988, the couple moved into the town of Floyd. In 2015, they moved to Faith Lutheran Home assisted living in Osage, Iowa.
Marlys enjoyed cooking and baking, gardening vegetables and flowers, sewing, knitting, embroidery, and especially taking care of her family. She was active in their church, Grace United Methodist Church, where the couple worked as janitors and caretakers for several years. One of her grandchildren believed her Grandma and Grandpa Hodina owned the church. When asked why she believed this, she responded, Grandma and Grandpa have the keys!
Grateful for having shared in Marlys’ life is her husband Stanley; son, Richard (CeCelia) Hodina, Floyd; son, David (Cheryl) Hodina, Rapid City, South Dakota; and daughter, Nancy Kephart of Riceville. She is also survived by 10 grandchildren, 21 great-grandchildren, and several nieces and nephews.
Marlys was preceded in death by her parents; her brothers: Roger and Donald; and her sisters: Lucille Teeple and Shirley Ryner. She was also preceded in death by her sisters-in-law: Peggy Chesnut, Margaret Wolf, and Virginia Stephenson; brothers-in-law: Willard Ryner, Harold Teeple, Raymond Wolf, and Glen Stephenson; father-in-law, Charles Hodina; mother-in-law, Lucette Hodina; and numerous aunts, uncles, and cousins.