Home › Obituaries › Phyllis Schrader, singer for many weddings and funerals, passes at age 87

Phyllis Schrader, singer for many weddings and funerals, passes at age 87 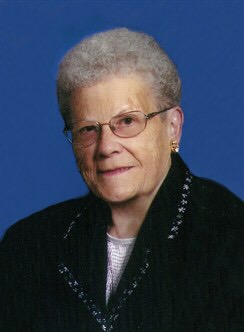 Phyllis Schrader, 87, of Charles City, passed away Saturday, March 25, 2017 at Cedar Health in Charles City.
A funeral service for Phyllis Schrader will be held 10:30 a.m. Wednesday, March 29, 2017 at Trinity United Methodist Church in Charles City with Pastor Jim Beranek officiating. Burial will be at Sunnyside Memory Gardens in rural Charles City.
Visitation will be at Hauser Funeral Home from 5:00 to 7:00 p.m. Tuesday, March 28, 2017 and will continue one hour prior to the funeral service Wednesday at the church.
Phyllis Mae (Zingg) Schrader, the daughter of Emil and Martha (Biekert) Zingg, was born August 6, 1929 in Charles City, Iowa. She graduated from Charles City High School in 1947. When she was a Sophomore, Phyllis worked at the Ben Franklin Store and as a Junior she worked at the Co-op for Ellis & Ellis and at First Security Bank. Phyllis continued working at First Security Bank after her graduation for several years. In 1975, she started working at First Citizens National Bank until her retirement on March 1, 1996.
Phyllis was united in marriage to Dave Schrader on February 18, 1950. The couple farmed together for several years and Phyllis helped milk cows. Phyllis was a member of Trinity United Methodist Church where she was involved with Midis, Faith Grace Circle and she sang in the choir. She also sang for many funerals and weddings and wished she had kept track of how many there actually were.
Phyllis was a member of the Cedar Side Club for several years and before her marriage the business women’s sorority, Beta Sigma Phi. She was a tremendous cook and baker. Phyllis made the most amazing sour cream raisin pie (which everyone loved, but she could not eat because she made it too often) and red velvet cake. She really enjoyed being able to spoil her grandchildren with her love and baked goods. Two things Phyllis looked forward to in her schedule were having coffee with her Class of 1947 coffee group once a month and having coffee with her church friends every Tuesday; these gatherings were a highlight in her life.
Living family members include her husband of 67 years, Dave of Charles City; four children: Nancy Herron of Charles City, David Schrader of Woodbridge, Connecticut, Richard (Terry) Schrader of Charles City and Michael Schrader of Providence, Rhode Island; four grandchildren: Paul (Amy) Schrader, Ryan (Shannon) Schrader, Stephanie Herron and Kevin (Tonni) Herron; four great-grandchildren: Chase Herron, Wyatt Schrader, Ellie Grace Schrader and Rayna Lou Schrader; brother, Ray (Carol) Zingg; along with nieces, nephews, other family members and friends.
She was preceded in death by her parents; step-father; and son, Kevin.